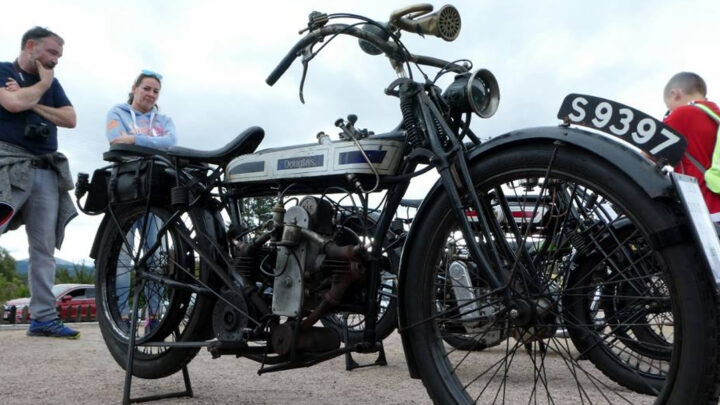 The Highland Classic Motorcycle Club was formed in May 1983 to bring together, on a regular basis, people who had a common interest in older British, European and American motorcycles.

By 1986 this had changed to include Japanese motorcycles over 20 years old. The club now welcomes all makes & models of motorcycles up to modern classics.
Our aim is to cater for all interests and aspects of road motorcycling, from restorations, to general care and maintenance, general road riding, whether you own a Veteran, Classic or fairly modern machine  and to encourage and promote the use of older motorcycles.

Membership stands at around 70 members, from various age groups and with a wide range of motorcycle knowledge and experience. They come from as far a field as Tain, Portree, Grantown, Elgin and Banff, with some members residing in Edinburgh, the Midlands and Wales.

History of the Club

A booklet with the full history of the club was produced for the clubs twentieth anniversary, and details the clubs humble beginnings in 1983 with Bob Fraser (deceased) and Alastair Alexander, the first Loch Ness Rally, and much more, right up to May 2003.
Some original copies are still available from the Mrs Sue Hanson, producer of the booklet. The booklet was updated in 2008, to cover the first the 25 years of the club, a copy of this book is given to new members on joining the club.

This website uses cookies to improve your experience while you navigate through the website. Out of these, the cookies that are categorized as necessary are stored on your browser as they are essential for the working of basic functionalities of the website. We also use third-party cookies that help us analyze and understand how you use this website. These cookies will be stored in your browser only with your consent. You also have the option to opt-out of these cookies. But opting out of some of these cookies may affect your browsing experience.
Necessary Always Enabled
Necessary cookies are absolutely essential for the website to function properly. This category only includes cookies that ensures basic functionalities and security features of the website. These cookies do not store any personal information.
Non-necessary
Any cookies that may not be particularly necessary for the website to function and is used specifically to collect user personal data via analytics, ads, other embedded contents are termed as non-necessary cookies. It is mandatory to procure user consent prior to running these cookies on your website.
SAVE & ACCEPT